12 Best Keto Vegetables That Are Low in Carbs

Vegetables are parts of plants that are seen as food and consumed by humans or animals as food. Vegetables can be eaten either raw or cooked and it plays an important role in human nutrition. Vegetables are mostly low in fat and carbohydrates, but high in vitamins, minerals and dietary fiber is of utmost nutritional benefits for man. Many nutritionists encourage people to consume plenty of vegetables, five portions or more a day often being the recommended prescription. 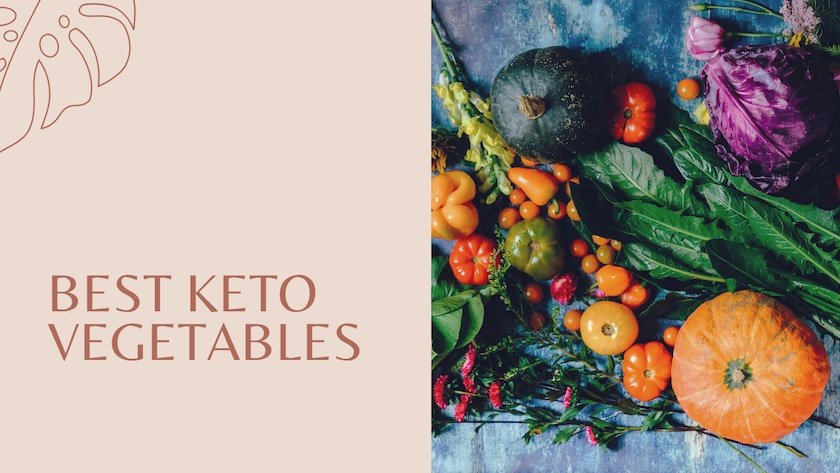 Vegetables play an important and essential role in our nutrition. Most veggies are low in fat and calories but are bulky and filling. They supply dietary fiber to the body and are important sources of essential vitamins, minerals, and trace elements. The important nutrients are the vitamins A, C, and E. In a diet that makes ample room for vegetables, there is definitely going to be a reduction in the incidence of cancer, stroke, cardiovascular disease, and other chronic ailments.
Researches proved that, when you compare a constant eater of vegetables with individuals who eat less than three servings of vegetables and fruits each day, those that eat more than three servings have an approximately twenty percent lower risk of developing coronary heart disease or stroke. The nutritional content of vegetables varies considerably based on it’s type; some contain useful amounts of protein though generally, veggies contain little to no fat, and varying proportions of vitamins such as vitamin A, vitamin K, vitamin B6; provitamins; dietary minerals; and carbohydrates.
However, vegetables often also contain toxins and antinutrients which may interfere with the absorption of nutrients by the body. These antinutrients include a-solanine, a-chaconine, enzyme inhibitors (of protease, cholinesterase, amylase, and it’s like), cyanide and cyanide precursors, tannins and others. These toxins are natural defenses for the plants, used to ward off the insects, predators and fungi that might attack the plant. Some beans contain phytohaemagglutinin, and cassava roots contain cyanogenic glycoside as do bamboo shoots. These toxins can be deactivated by adequately cooking the vegetables. Green potatoes contain glycoalkaloids and should be avoided by all means.
Reading more:

Vegetables, particularly leafy vegetables, have been roped into in nearly half the gastrointestinal infections caused by norovirus. These are vegetables that are commonly eaten raw and may become contaminated during their preparation by an infected food handler or hygiene. Hygiene is important when handling foods to be eaten raw, and such exposed food needs to be properly cleaned, handled, and stored to limit contamination by exposure to an unhygienic atmosphere.

The objective of preserving vegetables is to extend their availability for consumption. The aim of preserving is to harvest the vegetable at its maximum state of palatability and nutritional value, and preserve these qualities over an extended period of time. The main causes of deterioration in vegetables after they are gathered are the actions of naturally-occurring enzymes or the decay caused by microorganisms. Canning and freezing are the most common techniques used in preservation, and vegetables preserved by these methods are generally similar in nutritional value to their fresh counterparts with regards to carotenoids, vitamin E, minerals. and dietary fiber.
Reading more:

Vegetables are available in many varieties and can be classified into biological groups these groups include:

Considering that some vegetables are regarded to be low in carbohydrates makes them one of the best food groups to be added to a ketogenic diet. While one has to be careful about which vegetable to stock up on that are keto friendly, the nutrient and medical benefits gotten from them makes them an essential part of our diet.
While all food items are made up of macronutrients (carbs, protein, and fat). On a strict ketogenic diet, with fewer than 5% of calories from carbs, it’s important to know which best Keto veggies are the lowest in carbs, particularly if your goal is to consume fewer than 20 grams of carbs per day.
Keto vegetables with less than 5 grams of net carbs may be eaten relatively freely. It is hard to overeat spinach, zucchini, lettuce, cucumbers, cabbage, asparagus and kale on a keto diet as they are considered to be among the ketogenic vegetables list.
If you are doing a more moderate or liberal low-carb diet that allows more than 20 grams of carbs a day, you can eat as many above-ground keto friendly vegetables as you desire.
Reading more:

What Vegetables Are Keto Friendly?

Above-ground vegetables are generally lower in carbs and are usually the best keto options while root vegetables (also known as below-ground vegetables) contain more carbs and are great choices, especially potatoes and sweet potatoes.
The Carbs counts in above ground vegetables for keto are provided as net carbs per 100-gram serving.
Carb counts represent net carbs for a standard serving size of 100 grams for each vegetable which is about the weight of an average tomato. For example, 100 grams of asparagus contain 2 grams of net carbs while 100 grams of broccoli contain 4 grams of net carbs.
A word about onions: while they grow below ground and are higher carb, they can be added to foods as a seasoning because you generally wont eat too many at once. Green onions, or scallions, can be used to top salads or other dishes in modest amounts.

Vegetables That Are Keto Appropriate

One thing should be clear about Vegetables, despite being carbohydrates, are good for you. You should always add vegetables to your meal planning. But if you’re on the ultra-restrictive keto diet—which demands that you follow a high-fat, low-carb eating plan, you might want to avoid certain higher-carbohydrate vegetables that could potentially kick you out of ketosis.
While vegetables are among the most nutritious things you can eat, there are a few starchy and carbohydrate-dense items that can definitely throw off your keto diet and in small servings, too. ( potatoes, sweet potatoes, and carrots.)
Even if you aren’t on the keto diet, the vegetables that follow on this list are great for you. Many of them are rich in gut-filling fiber and they’re all loaded with disease-fighting antioxidants. Plus, many of them also possess a high water content, which in addition to helping you maintain good hydration can also help you with your feelings of fullness (and thereby help you eat less at mealtime and avoid mindless snacking after mealtime). All these vegetables are incredibly flavorful on their own with no ranch dressing needed, and are easy to work into healthy meals.
You can fill up your plate with these keto-friendly vegetables, all of which have few net grams of carbs and bring some more of the good stuff to your meals.